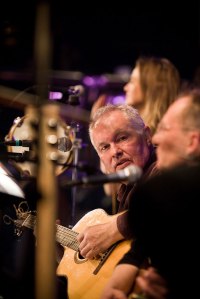 I attended Ravensbourne College of Art in 1966, where I met Glenn, who, like me, was a keen guitar player. We started jamming and were influenced at the time by John Renbourn and Burt Jansch. We began playing local folk clubs and gradually began adding additional members.

Both Glenn and I were studying graphic design, which, for both of us was not artistically stimulating enough. We met Colin, who was studying in the film and television school. A group of us rented a three story house in Beckenham, which included our soon to become manager, Chris Youle who was living with Jess,one of our art student group and Andy was a friend of a friend and brought in to make up the numbers to pay the rent. Bobbie, also turned up in a similar way and very soon we had a band with four of us living in the same house. I don’t know, these days, what the chances are of five such suitably creative people coming together are, but it does look like an uncanny set of coincidences.

It was at this time that I began writing songs and,through a drug induced haze,and from a rural background, began on the distinctive series of songs which were to become First Utterance. It was at this time that we met up with David Bowie, who was organizing a local weekly gig at a pub in Beckenham. This club was known as the Beckenham Arts Lab; so now we had a weekly residency – a great place to get a band up and running.

Whilst at the house in Beckenham, we auditioned a flute/ bongo player. Among those who applied was Michael Bammi Rose who captivated us and he joined but was replaced a year later by Rob Young, a friend of Colin’s. Chris eventually got us signed to PYE’s new Dawn label and we recorded First Utterance and began touring. After early indications that we were going to be successful, we were eclipsed by the changes in the early 1970s and the work dropped off as all acoustic bands fell out of favour with the emergence of glam rock.

In 1974 the newly formed Virgin Records asked us if we would reform to make another album. Most had gone their separate ways and my new material was much more commercial. You mustÂ  be aware of how it was in the 70s. The classification and genres ofÂ  the music scene contracted and the industry were totally singles orientated. Anyway only three original members ended up on ‘ To keep from Crying’ and, from our point of view the album was something of a disaster.

During our short history we had written two film scores for director, Lyndsay Shonteff – Permissive and Big Zapper. Afer the complete folding of Comus in 1974 members of the band, including myself collaborated on more film scores. I also designed album sleeves until the 1980s.

For some years I lived with the artist, Sheila Maclurkin. She designed the sleeve for the second Comus album, ‘To keep from Crying’. She had a series of exhibitions of her surreallist mythological fantasy art in Sweden for which I helped her prepare and assisted her with her etchings and screen prints. On the subject of the second album, none of the songs are in our current set, but I performed “Down Like A Movie Star” with the Swedish band Piu in Stockholm early in December 2008.

In 2000 I began classical training as a baritone and began scoring out classical songs. I am still working on this project, although, because of Comus reforming and the need for new material, the classical songs are on the back burner.

I look forward to seeing how far Comus can go this time round. We have the original line-up bar one and there is more interest in us now than when we were originally together.